Almond intrigue. They could tell me, but then they’d have to kill me. 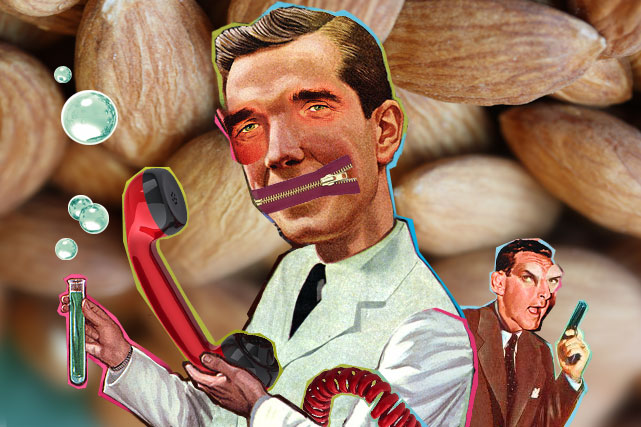 A few months ago, I cleaned out my very disorganized and extremely non-disaster-ready pantry to pave the way for a more sensible approach to food storage. Among the giant jars of boba balls and bags of guar gum, I discovered three jars of almond butter, two of them open, but all of them expired. Obviously, I enjoy the purchasing of this sticky brown paste to the actual ingesting of it.

I wondered if almond butter was really a sensible choice for long-term storage, so I did some research on line. Most sites report that a pre-packaged, unopened jar of almond butter can be stored without refrigeration for six to nine months; after that, it won’t go bad, it just won’t taste as good. This information came as a shock. I’ve stored almond butter for years on the shelf; I thought the stuff was more or less indestructible.

So how long do open jars last without refrigeration? After calling a variety of consumer helplines and receiving what sounded like wild guesses ranging from “a few months” to “forever”, I realized I needed to conduct my own test to get the real truth. I popped over to Central Market and bought a dollop of freshly ground almond butter from the bulk section; compared to my year-old stash, the fresh almond butter was the clear winner. However, the older product’s aroma and taste wasn’t all that bad; just a little “elderly”. So how long does almond butter remain edible – and at what point does it become unhealthful?

This time I decided to go straight to the folks in lab coats. I contacted the Blue Diamond Almond Research Center, which directed me to Dr. Michelle Danyluk at the University of Florida, who told me to contact the Food and Drug Administration, who put me on the trail of Caroline at the Food Marketing Institute ,who steered me towards Carol at Allexperts.com, who said to call the California Almond Board.

Along the way, I learned more than anyone would ever need to know about almonds. But there was still no consensus on the vital issue of almond butter storage.

Finally, I reached Guangwei Huang at the California Almond Board, a principal scientist for safety and food quality, who…didn’t feel all that comfortable speaking about almond butter either. He claimed he hadn’t actually tested any. That struck me as odd; isn’t it a bit like a vineyard owner who claims he never drinks wine? Are he and his cohorts afraid almond butter technology might fall into the hands of terrorists?

The conversation was a bit uncomfortable for both of us: frustrating for me because I had just spent two whole days interrogating Aldebaran shellmouths , and finally had a real scientist on the phone only to find that most of his answers started with “It depends”, and frustrating for him because he was probably busy doing highly scientific things with Bunsen burners and beakers when some almond-butter-obsessed malcontent interrupted him to pilfer top secret information.

Still, I present a few choice tidbits from our conversation…

Guangwei: It depends. If it’s been packaged correctly, sealed in a jar with a tight lid, and kept out of sunlight, more than a year.

S: What if it’s been opened?

G: I don’t know. I study almonds, not almond butter.

G: The oils in the almond have been released once made into almond butter, and are now more susceptible to oxidation. Oxygen is the enemy of any food with oils in it.

G: Raw. Roasting changes the cell structure, making the almond more susceptible to oxidation. You’re better off storing raw almonds. Do not buy roasted almonds unless you plan to eat them every day.

S: But if all U.S. almonds are required to be pasteurized, aren’t they also really roasted?

G: No, the pasteurization is very quick. It affects only the outside of the almond.

S: So the inside of the almond is still raw?

S: What about almonds that have been soaked? How quickly do they go bad?

G: It depends on how sanitary the conditions are. It’s best to soak the almonds in the refrigerator and make sure your hands and all surfaces are super-clean.

S: So can you store them unrefrigerated for a few days?

G: No, eat them right away.

S: So what about home made almond milk, which is made from soaked almonds?

G: It depends, again, on how sanitary the conditions are. If stored in the refrigerator, it should be consumed within a few days — no longer than a week.

S: If I vacuum-packed raw almonds in a Mylar bag using oxygen-absorbing packets, and sealed them inside a 10-gallon food-safe bucket, and sprinkled fairy dust on it, how long would they last?

G: It depends on the temperature. If stored below 70º F, probably more than 3 years.

S: So what are the other enemies of long-term food storage?

After I hung up, I was still frustrated, but I decided to stop badgering experts and move on to Stage Two. I had determined almonds and almond butter are moderately pantry friendly; so, assuming that meat and eggs, my usual sources of protein, will be scarce during red-light daysA disaster has hit, and you’re left without access to fresh food. Your fridge may be out, your water supply may be limited and your gas or electricity may be cut off, (no indoor cooking)., storing almonds still makes sense. It was time to conduct a taste test.

Until then, does anyone have a good recipe for almond butter bombs?