Are You My Mummy Food? Nina’s granola is just as good. 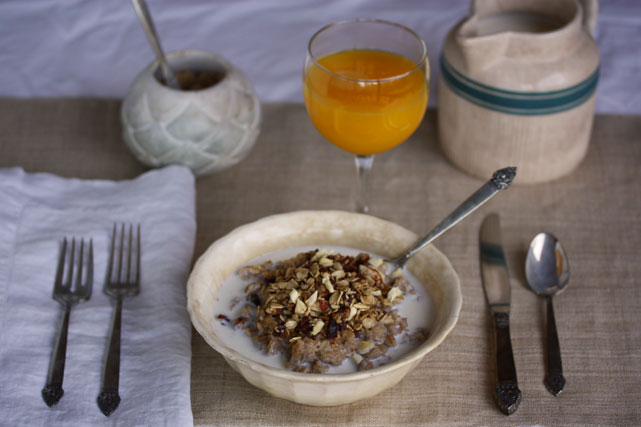 I came of age in a geographically isolated and bookstore-free town, long before cable TV and the health food revolution. My family’s 19″ Zenith received three channels (sometimes four, depending on atmospheric conditions), two of which were French-Canadian and therefore undecipherable to us hicks on the Yankee side of the border. Luckily, the one channel broadcasting in English was NBC, purveyors of the ganglia-warping H.R. Pufnstuf as well as Star Trek, The Jetsons, and Rowan & Martin’s Laugh-In. Further compounding this assault, every school night at 6 PM, The Huntley-Brinkley Report spat out Vietnam War statistics like sports scores: Us: 72 killed vs. Them: 133 killed. Adding to this contradictory stew of high and low absurdity, my mother chose to supplement her media intake with a weekly dose of the National Enquirer. It was there she read about Edgar Cayce, a trance-prone psychic who dispensed details of ancient civilizations, the history of Atlantis, dream-sourced health advice and — like all good marketing machines, recipes.

Through her underground network of budding New Age housewives, my mother somehow got her hands on one of Cayce’s books. She began regularly baking one recipe in particular, a toasted nut and seed concoction she erroneously referred to as “mummy food”I recently looked up the origin of this recipe and found that “mummy food” was indeed an Edgar Cayce speciality, but his version was a mixture of Assyrian figs, corn meal and milk meant to balance the body's pH.. I suspect she appropriated the word to add an air of mystery to her new wonder-food for her picky-eater children. Not that she needed to; the aroma of baking almonds and sesame seeds had us lined up and waiting like OliverYou know, that cute little blonde kid in the movie musical Oliver!., with cereal bowls in hand. She eventually tired either of chopping the nuts or regularly burning batches of expensive ingredients, so she moved on to embroidering sunflowers, and the family reverted to our morning staples of Wheaties and Cheerios.

Years later, around the time I laid eyes on my first avocado, I noticed a product called ”granola”. It looked eerily familiar. Could this be the same mysterious substance my mother experimented with during the ‘70s? I sampled quite a few brands, but was disappointed; most of them either had an unpleasant burnt quality or seemed like they’d be more at home in a horse’s feed bag. I can’t say I was nostalgic for many of my mother’s dishes, but “mummy food” granola was one of them.

Late last year, my friend Nina and her husband Booth came to visit from Seattle. She brought along a very large bag of homemade, gluten-free granola, as Booth and gluten do not play well together. After sampling a small handful, I had a pleasant flashback: mummy food at last!

Now I can make it for myself. I sprinkle it on top of oatmeal or hot quinoa cereal and enhance with raw milk and maple syrup. When I’m feeling indulgent, I combine it with full-fat Greek yogurt. Here are a few notes on the recipe.

Why it’s Gourmet Survivalist-worthy: Since I’m storing lots of nuts for protein, I should be rotating through them on non-emergency Green Light days. Granola is also very filling and nutrient-dense, making it a great storage food. (Stay tuned: I’m going to attempt to “bake” granola on a grill in a future post!)

Gluten: For gluten-free granola, make sure to use gluten-free oats, since oats can be easily contaminated by wheat during harvesting, processing or storage.

Substitutions: I tried tweaking Nina’s recipe a bit, but most of my experiments turned out poorly. I substituted sesame oil for some of the macadamia nut oil, but it tasted burnt.

I also tried cooking it to a deep golden brown, but this also tasted burnt. (I suspect the sesame seeds were the culprit this time).

Nina’s recipe contained 1/2 cup of flax seed meal, which is quite healthful, but it requires refrigeration, so I nixed it.

I’ve made it without the pumpkin seeds and it tasted just as good, but they’re rich in magnesiumMagnesium helps lower blood pressure, and reduces the risk of heart attack and strokes.; Dr. Oz considers them a super-food so I kept them in. 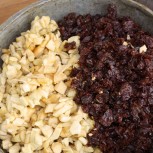 Raisins: One of my pet peeves is when I’m chomping happily on my breakfast and a big sticky raisin lodges between two molars and brings the whole proceeding to a screeching halt. For that reason, I chop my raisins to even smaller pieces. The Gourmet Survivalist’s taste-test-winning raisins are the organic Thompsons from Austin’s Wheatsville Co-op. They ‘re also the least expensive at $2.99/lbAs of January 2012., pre-bagged from the bulk department. The other organic brands tested were from Central Market, Whole Foods Market and H-E-B grocery stores.

Speedy Tip: Chop the nuts and seeds in a food processor. You can chop the apples in a separate batch, but don’t add the raisins or you’ll end up with a big sticky blob.

Storage Info: If you’re storing for the long term (more than 3 weeks), don’t add dried fruit. Even though the apples and raisins are dehydrated, they still retain some moisture, which could cause mold growth and degradation of the grains, nuts and seeds.

One Response to Are You My Mummy Food? Nina’s granola is just as good.